Home in the Land of Sea and Sun

How I Spent My Summer Vacation

It has 365 Beaches, one for every day of the year. Cricket and sailing are its major sports; it’s home to some of the greatest cricket players and one of the premier sailing regattas in the world. The world’s sweetest pineapple is native to its land. It boasts a rich history dating back two and a half millennia BC when the Ciboney were its inhabitants. Today you can still see mills and forts from the 17th & 18th centuries when the economy was based on sugar and the island offered control over the major sailing routes to and from the region’s rich neighboring colonies. What do you call such a place? You can call it Antigua. I call it Wadadli because it’s my home.

After being away for 33 years, I traveled back to my homeland to celebrate my birthday with my extended family. With almost 15 of us from different places landing around the same time, the fun and reunion started before we even left the airport. The days that followed were filled with even more family and friends and one amazing event after the next. My birthday barbecue and pool party kicked off the festivities. Over the next week we went to the beach, played t-shirt mas, sailed around the island, went to Melting Pot – an all night outdoor concert, shot some pool, shopped, and ate lots and lots of great Antiguan food! One day, we even got to see the island and all that it has to offer through the eyes of my cousin, our own personal, native tour guide. Even though I left when I was seven, the sights and sounds and smells and tastes were ever so familiar and brought me back to the time when my cousins and I spent most of our days living and playing together in the sunshine at Grandma’s house on the small island in the Caribbean that we will always call home. 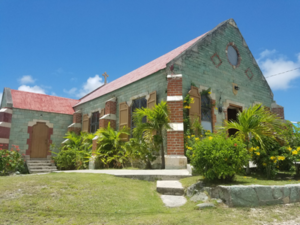 St. Barnabas Anglican Church gets its color from Antigua green stone. Unique to the southern districts of Antigua, many homes and other buildings in the town of Liberta are built using it. 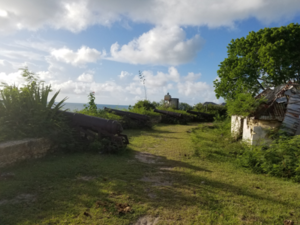 Fort James: Located on the northern entrance to St. John’s Harbour, the foundation stones for Fort James were laid in 1739. Today, its 10 signature canons still point out into the harbor. 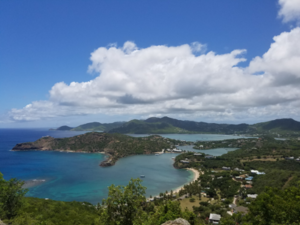 Shirley Heights: The view of English and Falmouth Harbours from atop this restored military lookout is considered the best in Antigua and a great place to watch the sunset. 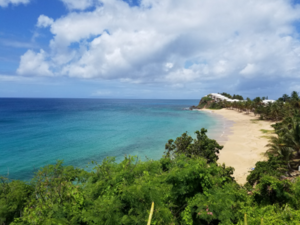 With 365 beaches, it’s not too hard to find beautiful sights like this one. Standing at the southernmost tip of Old Road, if you look to the west this is what you’ll see… 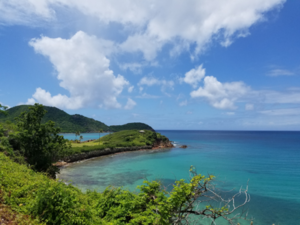 …and here’s what you’ll see when you look to the east.