Dragonflies & Drinks: Dining for a Cause

On Saturday June 9, 2018, Artsmith held its first major fundraising dinner, Dragonflies & Drinks, on the 50th floor of 1 New York Plaza in lower Manhattan in aid of its arts education programs. Views of the city skyline seemed a fitting architectural backdrop for the selection of student artwork on display around the room.

Host of the evening, Nyssa Pitts Morais, VP of Global Analytics & Insights at Revlon welcomed 59 guests who gathered in support of the organization’s efforts to empower Bronx youth in under-resourced communities. 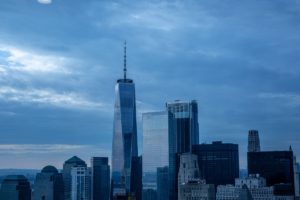 The view of One World Trade Center from Dragonflies & Drinks.

With a newly erected World Trade Center building in the background, Artsmith founder and president, Tricia Smith, recounted her time working at a Yonkers nonprofit when the September 11, 2001, terrorist attack brought down the financial district’s then landmark Twin Towers. The students expressed that they had never visited the City and that they felt disconnected from the incident.

“They thought this event that impacted the whole world had nothing to do with them,” Smith recalled. The 12 miles between Yonkers and Manhattan represented more than geographic distance. For Smith, it signaled a need to do more to expand at risk youth’s worldview and sense of agency.

Her unexpected entry into arts education in 2014 came as a result of exposure to a wide array of scholastic and cultural experiences throughout her personal and professional life. A chance reading of Hot Girl by young adult author Dream Jordan brought it all together, prompting a simple idea: if young people could relate to what they were reading they could learn from it.

What started with one program: Words vs. Pictures, an exploration of literary and visual arts, has blossomed into an organization on a mission to make critical thinking, self expression and empathy cool. It’s founded on the premise that “the world is better served when all people have equal opportunities.”

The fundraiser was designed to engage the senses, from the live music, to the tap performance, drawings from their recent City Design project – based on using art to teach civic engagement – and the full course meal prepared by Chef Melvin Myers who even showed off his culinary artistry with a fruit sculpture engraved with Artsmith’s dragonfly logo.

“There’s a vibe in this room that’s unlike anything I’ve attended. This amazing powerhouse of individuals understand that somewhere in their lives art played a role,” said Lisa Sorin, one of the honorees that evening.

After dinner, the event crescendoed with an award ceremony recognizing two leaders in arts education and the Arts. Lisa Sorin, Executive Director of the Westchester Square Business Improvement District and Bronx Council on the Arts (BCA) board member received the Emergence Award. Inspired by the final stage of dragonfly development when the larvae comes into adulthood, the Emergence Award celebrates a leader who has partnered with Artsmith to inspire youth as they grow.

Sorin said the award was one of the most significant prizes she had received to date. Coming from a family of educators “my part of it is being able to support people like Tricia,” Sorin said. Aside from acting as a resource for the organization, Sorin participated as judge in Artsmith first t-shirt design contest last year, which was open to participants citywide.

“Art is not just crayons…When you talk about the Arts people roll their eyes and think ‘here we go again.’ This is different. If [Artsmith] can multiply this times ten and take this type of energy to different [places], people would get what art really means,” Sorin said.

Internationally renowned tap dancer, choreographer and educator, Ayodele Casel was presented with the Transcendence Award for outstanding work in her field and using her art to advance young people.

“Getting this award right now just lets me know that I’m on the right track,” the NYU Tisch School of the Arts alum said. A proud Bronx native, Casel has shared the stage with Gregory hines, Savion Glover’s company NYOTs and other notable figures in the world of syncopated dance. “The audacity of being who you are is something that I bring to my work and I think that’s very specific Bronx, very specific Black and very specific Puerto Rican.” Casel is headed to Boston in the fall for a residency at Harvard University.

Artsmith is a young organization with many firsts, but over its four years in operation, the nonprofit has received grants to provide young learners with immersive cultural activities like the upcoming drum orchestra program made possible with the support of grants from Citizens Committee for New York City and BCA. The program will be led by Red Sahara Collective, the vocalist, guitarist and conga-playing trio who provided the event’s melodic soundtrack as guests mingled and participated in a silent auction.

Donations will go to creating and maintaining programs for participants like Arianna Aquino, a new student in the Photo Narratives program who attended the event with her mother. “Photo Narratives is fun. I get to express myself through my pictures,” Aquino explained. The program teaches middle and high school students the mechanics of photography and storytelling. Some of the students’ nature shots were also featured at the event.

Although some may ask how effective an arts education nonprofit in the Bronx can be, Artsmith leaders and staff are steadfast in their mission to give their students the tools they need to define success for themselves and reach their goals.

“The questions I get asked the most are ‘why an arts education nonprofit and why me?,’” Smith said during her introduction. “It’s one thing if you go down a path in life because that’s the choice you make and you have everything you need to make that choice. It’s another thing to end up there if you think that’s all there is and you don’t know what else it out there. I want to do what I can to raise the knowledge of the students we serve.”

Visit the gallery to see pictures from the event: 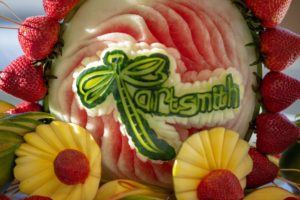 Check out videos of the tributes to our honorees: